The Difference Between Clinical Psychology and Neuropsychology? 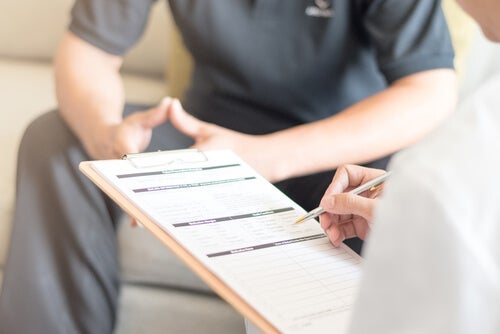 Psychology is a science that arose from the need to know and understand human beings. Over time, many specialties within the field of psychology have developed. These specialties grow and change according to their area of focus. It’s within this context that we can talk about the difference between clinical psychology and neuropsychology.

As new approaches emerge, specialization increases, along with the number of questions that we face. In this article, we’ll try to explain the difference between clinical psychology and neuropsychology.

Many people attribute the beginnings of this approach to a man named Lightner Witmer, who established the first psychology clinic in 1896. This new branch solidified with the creation of the American Psychological Association, or the APA.

In the beginning, the goal of clinical psychology was to find traits or internal factors that lead people to develop psychopathological conditions. Instead of studying the person’s condition in isolation, clinical psychology looks at the factors that control and intervene in their behavior. This psychological approach started as a study of “the abnormal”. Consequently, its sphere of action developed around treating and explaining the condition.

Over time, the prevention of mental illnesses joined recovery as a primary goal of clinical psychology. As a result, psychologists started to work on techniques to avoid the development of pathologies by teaching healthy mental habits.

Likewise, experts in the clinical psychology field started to implement what’s known as “advice therapy”. This involves teaching people to effectively solve their problems in situations that might come up in their daily lives. As a result, emotional support became part of the practice.

Neuropsychology was formally established at the beginning of the 20th century by a Russian man named Alexander Luria. His research involved developing techniques to study the behavior of people with damage to their central nervous systems. These studies gave neurologists enough data to pinpoint the location and extension of the injury so they could figure out the best way to intervene.

Neuropsychology, then, focuses on individuals with brain damage that alters their cognitive functions in some way. Consequently, the goal of this approach is the evaluation and rehabilitation of cognitive function and behavior. Today, neuropsychologist work with children who have neurological development disorders as well as patients with brain damage.

What’s the difference between clinical psychology and neuropsychology in the clinical environment?

Essentially, clinical psychology focuses on the diagnosis and treatment of emotional disorders, personality disorders, and behavioral problems. That includes conditions such as depression and anxiety, among others. It can also provide tools to help manage behavioral disorders such as hyperactivity.

On the prevention side, clinical psychology teaches patients the following:

The goal is for the patient to get to know themselves and be able to function on a social and cognitive level. As a result, they can improve their quality of life.

The difference between clinical psychology and neuropsychology is their function in the clinical sphere. The latter deals with the cognitive and emotional evaluation related to brain alterations. It also develops processes to rehabilitate higher-order functions so that the affected individual can develop autonomy and preserve their quality of life.

As such, neuropsychology tends to focus on individuals who have problems with memory, attention, praxis (learned motor activity), gnosis (the brain’s ability to recognize previously learned information), language, and executive functions. Neuropsychologists also work with the cognitive aspects of mental illness, such as schizophrenia or obsessive-compulsive disorder.

Among the goals of rehabilitation are recuperating what’s damaged and stimulating cognitive functions so that they develop properly. In the case of permanently damaged functions, neuropsychologists can help individuals find strategies to compensate for what they’ve lost.

What’s the difference between clinical psychology and neuropsychology from a research standpoint?

Today, one field of research in clinical psychology focuses on getting a deeper understanding of psychopathological disorders. The goal is to identify the differences between people who behave according to societal norms and those who don’t.

Clinical psychology researchers are also trying to get a deeper understanding of individual personal development. Consequently, their studies analyze factors that might predispose someone to develop an emotional disorder.

Another research focus is on improving psychotherapy methods. The goal is to find tools that allow for better diagnosis and treatment of emotional disorders. Researchers hope to develop more precise methods that can adapt to the specifics of each disorder.

Neuropsychology, on the other hand, has a different research focus. Recently, neuropsychologists have started to work hand-in-hand with cognitive neuroscientists. The goal of this collaboration is to understand the role of higher-order cognitive functions in the development of psychiatric and psychological pathologies. Researchers in these fields also hope to develop strategies for more effective recovery from these disorders.

Studies have also focused on understanding the consequences of neurodevelopment problems for the individual. Researchers are interested in pathologies that seem to be associated with brain development problems, such as autism and attention-deficit/hyperactivity disorder.

Lastly, neuropsychological rehabilitation is also of interest. Psychologists want to integrate their therapeutic methods with technological tools to make therapy more effective. The idea is for these tools to help therapists develop activities that more accurately reflect the patient’s day-to-day life, which will improve overall therapeutic results.

It’s important to clarify that while these two specialties have their differences, they complement each other on a clinical and research level. A proper diagnosis and treatment of any psychological or neuropsychological disorder should include the perspective of both specialties. In other words, the combination of these two approaches can help achieve the therapeutic goal of individual autonomy and quality of life.

That being said, there are differences between clinical psychology and neuropsychology. Each one specializes in different clinical spheres. In other words, one focuses on emotional and behavioral disorders, while the other focuses on cognitive deficiencies and brain damage.

Lastly, each specialty is on a different path when it comes to research, and focuses on aspects that are specifically relevant to it. That being said, advances in either approach will help improve resources and the understanding of many mental health aspects.

Tags:
Previous Article
7 Fascinating Foods and Supplements That Work Like Viagra
Next Article
Learn the Facts About Rogaine and Low Libido

Learn the Facts About Rogaine and Low Libido
HealthyAgingThinkTank April 14, 2020

Our latest articles for health, fitness, beauty, and more delivered right to your inbox!